Brilliant Tang Dynasty Strategist or Wicked Witch of the East?

Wu Zetian (624-705) became China’s first and only female emperor through a series of clever Machiavellian moves. Once in power, she pushed through reforms and expanded the Tang empire’s footprint. She was respected for her solid judgment, and gave birth to three sons who also became emperors.

As a precocious child, Wu Zetian hated girly things like needlepoint but enjoyed reading and travel with her parents. Her mother wept as she was taken away to become a royal consort, but Wu consoled her saying, “How do you know it’s not my fortune to meet the Son of Heaven?”

Having your 13-year-old daughter chosen as an imperial concubine was like your family winning the lottery. She might one day become a prized empress. Or she makes one wrong move, and you’re all wiped out.

Wu Zetian’s tenacity enabled her to become a trusted confidant to both Emperor Taizong and later to his son Emperor Gaozong, somehow escaping the convent (concubines who didn’t bear sons, upon the emperor’s death, are sent away to become nuns) and dodging Confucian prohibitions against sharing a bed with a dead man’s son. Some historians surmise that they were already doing the deed when dad was alive. Oh my.

Climbing the ranks, Consort Wu had a real flair for not letting the truth derail her ambitions. She made multiple attempts to unseat Empress Wang, accusing her of practicing witchcraft and plotting treason. It’s said Consort Wu even strangled her own newborn daughter and pinned it on the empress! Once Emperor Gaozong caved in and demoted Wang, the new Empress Wu cleaned house, executing the former empress and all others who opposed her ascent. She later claimed their angry ghosts haunted her for years – go figure.

Being number two in command wasn’t enough. Impatient with Gaozong’s ineffectual leadership, she became the “Wizard of Oz” behind the curtain of his throne, influencing all important decisions. Gaozong’s premature demise (omigod, where did that poison come from?) and a series of feckless replacements prompted Wu Zetian to drop the façade and declare herself the first emperor in a new dynasty.

Here’s how she compares with other famous women leaders in history: 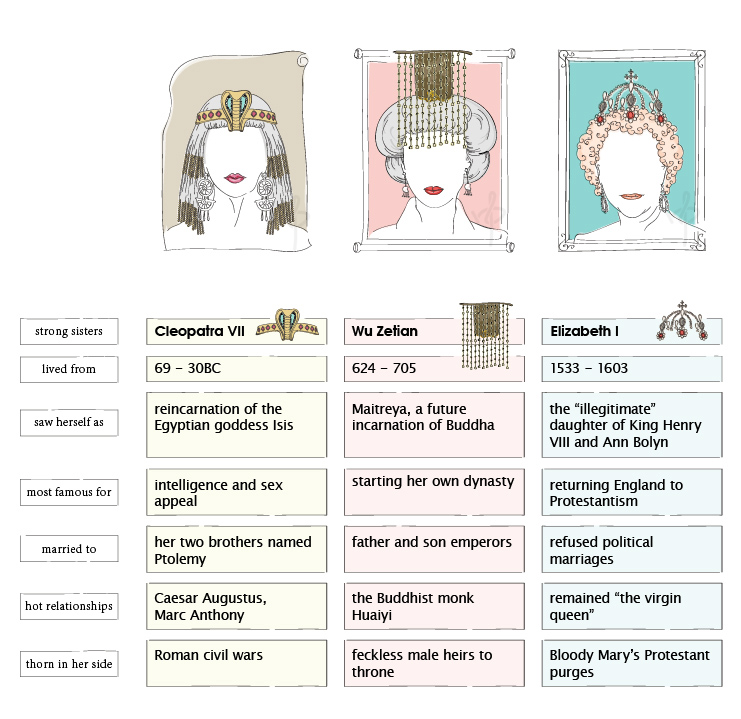 Critics portray Wu Zetian as a paranoid control freak, but how different was she from earlier emperors? Although her reign failed to cement the concept of female equality in Chinese society, it showed a competent woman could get the job done and further strengthened the legacy of the Tang Dynasty.

Wu Zetian’s popular and intriguing story has been immortalised in numerous films and TV dramas over the years. Most recently, the illusive female emperor was played to record-breaking commercial success by international superstar Fan Bingbing in a TV series called “The Empress of China” (武媚娘传奇). Her beautiful Tang era costumes received widespread praise, but later came under fire for their overexposing nature (i.e. too much boobs). The offending scenes featuring low-cut dresses and corsets were then re-edited with more close ups of their faces. The awkward cuts prompted Chinese netizens to create viral spoofs of the butchered drama newly nicknamed “The Saga of Big Head Wu.”

Do you know your Country Name in Chinese?

Do you know your Country Name in Chinese?