What Dragons Reveal About East/West Thinking

Dragons. They’re everywhere…and they’re nowhere. Some say Chinese dragons aren’t dragons at all! How does this ancient creature keep clawing back into our 21st Century consciousness?

China Simplified decided to explore dragons with you this week. How strange! Dragons aren’t animals we bump into everyday, not even once in a lifetime, except perhaps in our dreams. Nobody studies their fossilized remains. Modern scientists cannot even produce evidence of their existence. Yet more than most mythic creatures, dragons illustrate the perceptual differences and similarities between East and West.

Western explorers scrawled those words onto maps when encountering vast stretches of uncharted ocean known for swallowing ships. Drawing upon the Greek drakon meaning ‘serpent’, the folklore of the west characterizes dragons as lizardly antiheroes, casting them as powerful adversaries, threshold guardians, sea demons, dungeon dwellers and devil incarnations. Only more recently have dragons emerged as misunderstood beasts, for example, in the 1963 song Puff, the Magic Dragon and the DreamWorks 2010 blockbuster film How To Train Your Dragon, based on the book series of British author Cressida Cowell.

“They are loathsome creatures to behold. There are some ten paces in length as thick as a stout cask. They have enormous heads and bulging eyes. Their mouth is big enough to swallow a man in one gulp.” – Marco Polo

Beyond the speculative classification of dinosaurs as Mesozoic dragons, and the namesake Komodo dragon living in Indonesia, it’s likely that anyone who’s ever seen a ‘dragon’ has seen a crocodile. All in all, western dragons are scary, evil, dangerous creatures. Do not keep them as pets.

The Descendants of Dragons

Chinese mythology portrays dragons as auspicious, benevolent protectors. Among its earliest references are the snake-like bodies of Fuxi (fú xī 伏羲) and Nuwa (nǚ wā 女娲), China’s Adam and Eve, from whom Chinese are said to have descended.

Another story credits the legendary Yellow Emperor, Huang Di (huáng dì 黃帝), one of the fathers of Chinese culture, with evolving the dragon symbolism. His first coat of arms featured a snake. After each tribal conquest, Huang Di added a potent aspect of the defeated tribe’s totem animal to his own, so over time, his snake evolved to resemble the multifaceted Chinese ‘dragon’ we know today.

One might say the character lóng 龍/龙, (traditional & simplified chars) – originating from the sound of thunder and coming to symbolize the emperor – represents the Chinese better than any other symbol. The 龙 children admire and celebrate its spirit, from the Dragon Boat Festival to the lóng tái tóu 龙抬头 Dragon Raising Head Festival, a “Groundhog Day” of sorts, welcoming the spring rains and fertility of the land.

Speaking of fertility, women in China gave birth to 5% more babies than average in 2012, the most recent Dragon year in Chinese astrology. Not to be outdone, in Singapore the increase was 10%. Couples trying to have dragons with last minute (early) cesarean births, or putting off deliveries beyond the Lunar New Year through sheer willpower, first puts a strain on the medical system, then later on the educational system, as the bulge of students competes for limited admissions. But most consider it a small price to pay for the anticipated increase of the child’s prosperity and prestige. 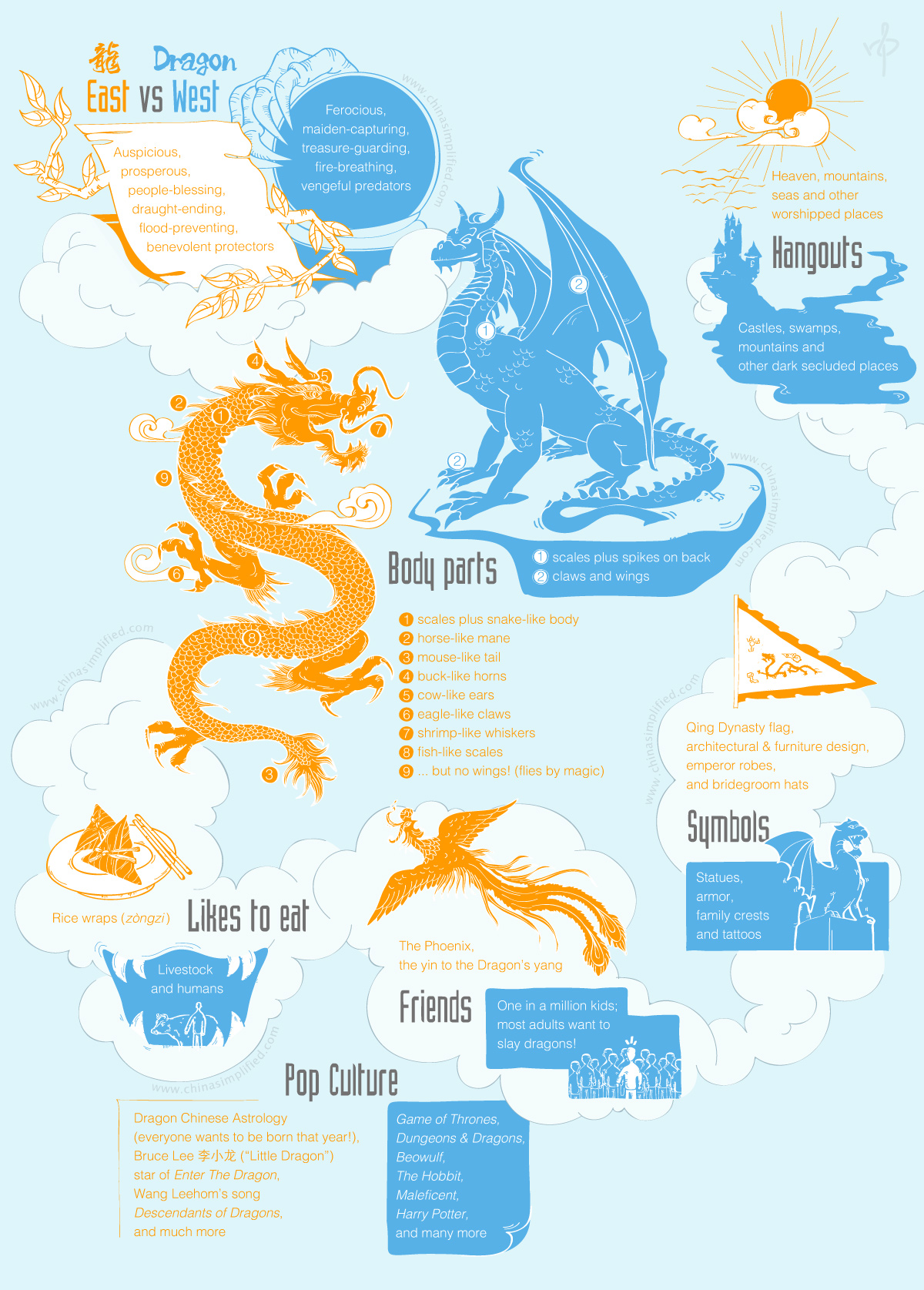 Dragons inhabit the unconscious realms of East and West. Unique origins, diverse features, but much in common: claws and scales, strength of will, a preference for seclusion. Ravioli and dumplings, boxing and gongfu… how we differ as peoples drives our mutual curiosity, just as our commonality facilitates our communication.

Fortunately, the dragon isn’t an endangered species or a limited resource. Nobody can ‘own’ him. And he’s not for sale. The dragon lives on, beyond our control, in the rarefied air of our fertile imaginations. Trusted ally or worthy adversary, these mythic creatures represent the primordial hopes and fears, the dreams and aspirations, of many a generation.

In other words, the dragon reminds us all of what it really means to be human.