Advice For China Baijiu Sessions plus a Whisky Comparison

St. Patrick wasn’t even Irish (he was English) and alas, he never came to China, yet the tradition of drinking spans many countries and cultures. Let’s take a closer look at the whisky-baijiu conundrum and the creative inspirations of two legendary poets, one Irish, the other Chinese.

Good news! If you’ve overdone the báijiǔ (白酒 lit. white spirits) during the Spring Festival, or over-imbibed with business associates in the opening weeks of the new year, St. Patrick’s Day on March 17 presents the perfect excuse to revive your palate with a wee dram of whisky*…Irish, Scottish, Japanese, Canadian, American or otherwise.

“In wine there is wisdom, in beer there is freedom, in water there is bacteria.”
– Benjamin Franklin

The festival’s namesake, St. Patrick, was kidnapped by raiders and only reached Ireland much later as a missionary, who according to folklore, drove all the snakes from Ireland. More likely, this was religious allegory for ridding the island of its earlier pagan influences, borrowing from the serpent symbolism in the story of Adam & Eve. For Christians, the traditional Lenten dietary restrictions were lifted for the day and heavy drinking became a signature, if not encouraged part of the celebration.

Here in China, drinking baijiu can represent a show of respect/face or demonstrate the closeness of a relationship. Big dollar baijiu bottles among the 10 most famous brands of Chinese liquor also tip off one’s wealth and success, though counterfeit bottles plague the markets for Chinese spirits as well as imported whiskies. Baijiu is almost always served with meals, especially meals with purpose, such as those sealing a business deal, building stronger personal bonds or marking important life milestones.

Many Chinese love toasting with foreigners to test their cultural commitment, so to speak. And if you’re one of the lone foreigners at a banquet, especially one integral to the business deal at hand, expect to have all your Chinese friends, along with any “designated drinkers” they’ve invited to the event, lining up to gānbēi (干杯 lit. dry glass) you into a drunken state of aromatic bliss.

“If Chinese gang up on you at a banquet, don’t be wimpy. Immediately pour more drinks to ganbei the top guys and keep going until they realize you can’t be intimidated.”
– unnamed expat friend

If you are at a Chinese banquet and do not want to drink for any reason, be sure to state this intention clearly up front before the festivities begin. Once the bottles start pouring, it’s too late to refuse! Big loss of face for the host. And maybe game over for your business deal. 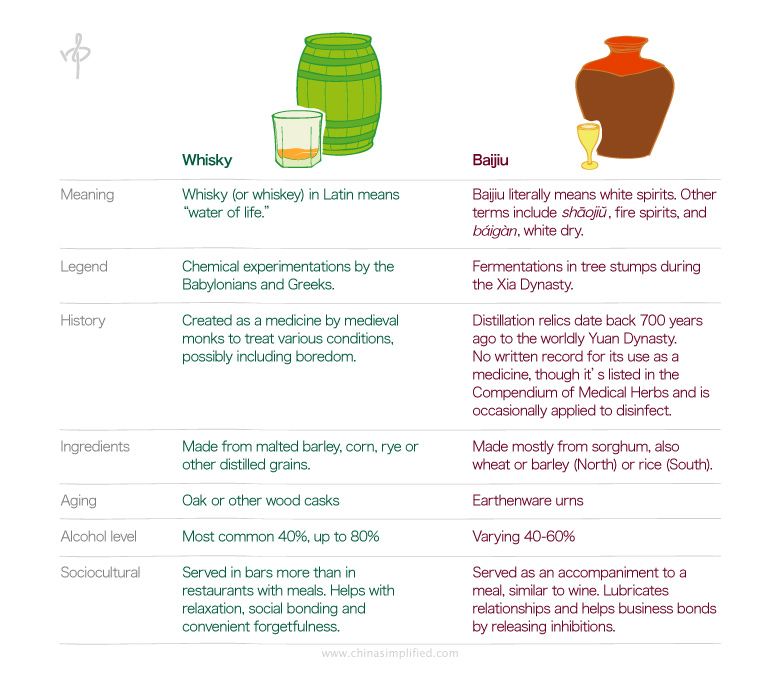 Writers throughout the ages have long eulogized drinking as the cause – and the solution – to all of life’s problems. Although their poems did not single out whisky and baijiu as their sources of inspiration, William Butler Yeats, Ireland’s first Nobel Prize Winner in Literature, and Xu Zhimo, one of China’s foremost modern poets, both gave voice to their affection for spirits around the same time in distant lands:

Excerpted from “No. 7 Shihu Hutong”

Xu Zhimo (1897-1931)One jin*, two jin, drink to the last drop,
glassfuls of liquor joy, faces full with liquor flush,
Laughter like chained pearls,
floating with drinkers free as spirits
This is our little courtyard, sometimes immersed in utter joy.

* A “wee dram” is officially defined as 1/8 of a fluid ounce, much less than the typical 1.0-1.5 ounce bar pour, but in common parlance, it’s come to represent a small friendly drink likely to lead to more.

“Always do sober what you said you’d do drunk. That will teach you to keep your mouth shut.”
– Ernest Hemmingway

Feel free to share your own drinking experiences in the comments section below. We never cease to be amazed at the diversity of stories coming from the multicultural milieu that is modern China.
For more on business socializing in China, visit:
Chinese Dinner Etiquette – 4 Key Insights for Foreign Guests
Chinese Dinner Etiquette – To Pay Or Not To Pay? (Hamlet’s Question In China)

Empress Dowager Cixi: The Woman Who Ruled China From Behind The Curtain

Empress Dowager Cixi: The Woman Who Ruled China From Behind The Curtain