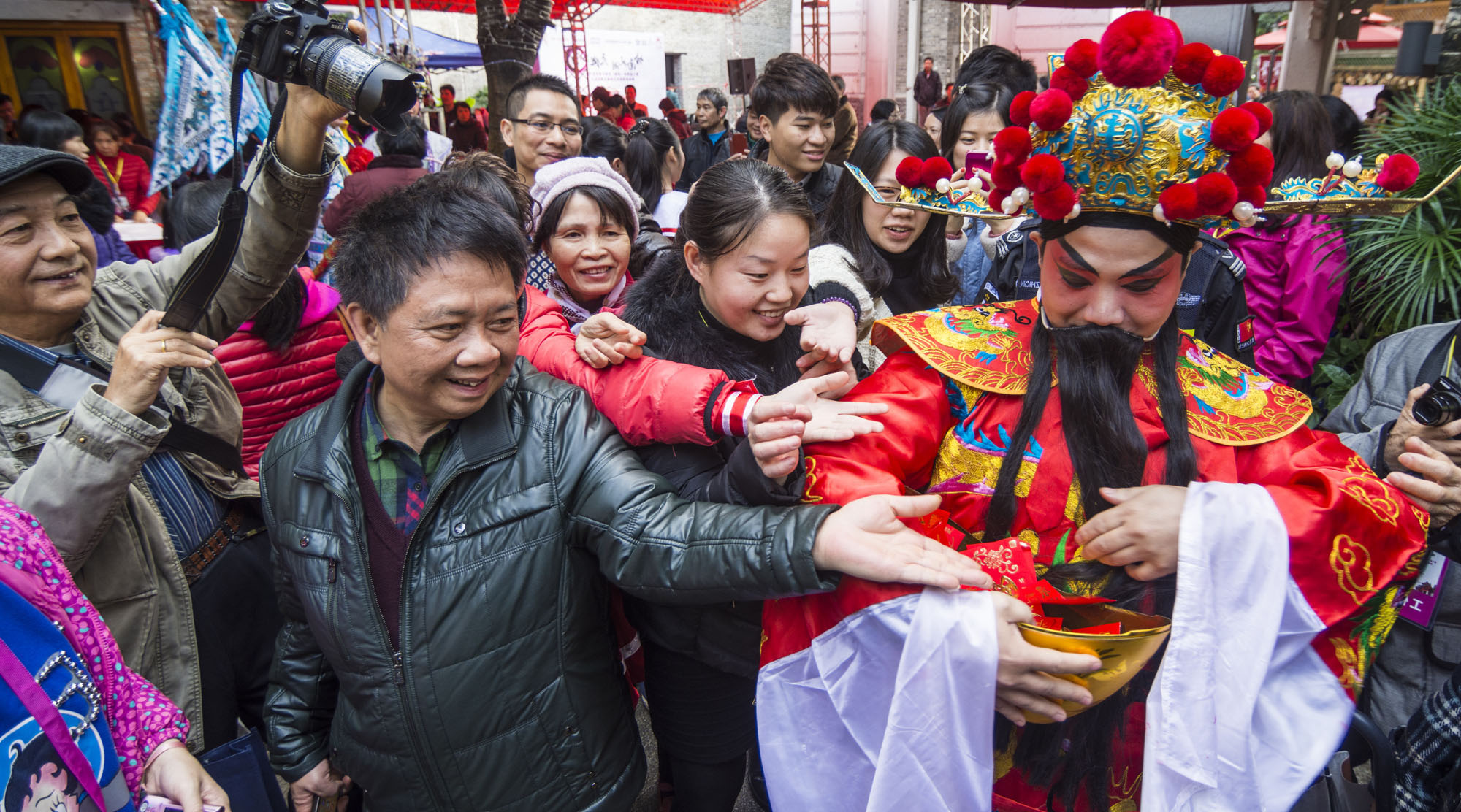 People of many cultures call upon a God or gods for guidance and protection in their daily lives, and the Chinese are no exception. Let’s meet three traditional deities who play starring roles during the Chinese New Year holiday.

The Kitchen God protects the household and oversees its moral health, which is somewhat ironic since his human-to-deity transformation came after he abandoned his wife for a younger woman.

In this cautionary tale, Zao Jun’s earthly form goes blind, so the fickle younger woman leaves him and he must resort to begging on the street. He ends up being taken in by his former wife, unable to recognize her true identity. As he relates his tragic story and sincere regret to her, his vision is miraculously restored. The sight of his longsuffering wife overwhelms him with guilt and he leaps into the hearth where he is burned to death. She eulogizes him with a stove shrine which leads to him taking on a divine role.

Chinese celebrate the Kitchen God on the 23rd day of the 12th month each lunar year, a day many call “Little New Year.” The family burns a paper effigy of the Kitchen God to send him to Heaven and report to the Jade Emperor whether the family members were naughty or nice. Before the Kitchen God departs, however, they might smear his lips with honey to sweeten his words, or perhaps to keep his lips stuck together!

Families by tradition welcome back the Kitchen God from Heaven on the 4th day of Chinese New Year by hanging a new paper effigy above the hearth, a practice which has suffered neglect in the age of modern gas and electric stoves.

Chinese door gods protect families and businesses by safeguarding their fortunes and dispelling evil influences. They appear in more embodiments and incarnations than the Wealth and Kitchen gods combined.

The earliest recorded door gods were Shentu and Yulü, tasked by the Jade Emperor to protect the Peaches of Immortality. From the Zhou Dynasty (1046-256BC) to the Qing Dynasty (1644-1911AD), even into the communist new China, ordinary people have chosen legendary heroes, religious masters, respected judges and revolutionaries to secure, bless and empower their households.

The Romans also worshipped a door protector, named Janus, for whom the month of January was named. Janus, whose two-faced representation allowed him to see both the past and the future, oversaw beginnings, endings, transitions and time.

In today’s commercial world, we can recognize the HSBC bronze lions as threshold guardians, which it’s said, were inspired by the lion sculptures outside the Venetian Arsenal.

Many modern Chinese families continue to hang Door Gods on each side of their front entrances to keep out the bad and usher in the good.

The God of Wealth

The most prominent and popular divine being during Spring Festival is the God of Wealth (shown in the header image). We even go around wishing each other gōngxǐ fācái (恭喜发财) “may you get rich in the new year!”

Chinese gods of prosperity have appeared in many representations across the ages, though the most memorable is the legendary hermit Zhao Gongming (赵公明) who fought to save the collapsing Shang Dynasty in the 11th century BC. The colorful Zhao rode into battle on the back of a tiger, armed with an iron cudgel that could turn stone into gold and magic pearls that explode like grenades. Zhao was defeated when a supporter of the incoming Zhou Dynasty shot arrows through the eyes and heart of a straw man bearing Zhao’s name to cause his death. As the God of Wealth without eyes or a heart, it’s claimed that people of any background can receive his blessing and discover their path to abundance.

People welcome back the God of Wealth on the 5th day of Chinese New Year, which is said to be his birthday, by setting off firecrackers as they reopen their businesses.

Author Deng Mingdao in The Lunar Tao reminds us: The God of Wealth doesn’t merely dole out riches. While people make offerings to him in their homes, and businesspeople keep him in their stores, everyone still has to work. Great wealth is earned. To be wealthy, we have to work hard and we have to be smart. The God of Wealth may accept the offerings on the altar, inhale the incense, and thrill to the firecrackers, but the real offering he requires is hard work.