The Birth of Modern China

Protestors set fire to a cabinet minister’s home. Police intervene to disperse the mob and arrest 1,150 protesters, turning parts of Beijing University into a makeshift jail. The Beijing government doesn’t know it’s already too late to contain the upswell of popular discontent. Students go on strike in other cities, and soon, everyone has heard the rallying cry. They demand action. China’s brightest young minds are saying, “We’re not going to take it anymore.”

The date? May 4, 1919, exactly one hundred years ago today. It was the start of the May Fourth Movement and the event many historians point to as the birth of modern China.

Do the Right Thing

It all started with the bad news out of France. The Treaty of Versailles, signed by victorious Western powers at the completion of the First World War, should have returned German concessions in Shandong Province to their rightful owner, China. Instead, the treaty gave them to China’s usurping occupier, Japan, which was already in control of Manchuria and strategizing ways to swallow the entire country. What’s worse, China’s own northern warlord government (soon to be ousted) was complicit in the deal: they’d taken Japanese “loans” in exchange for staying quiet. Some thanks for China, who sent 140,000 laborers to France in support of the Allied war effort. 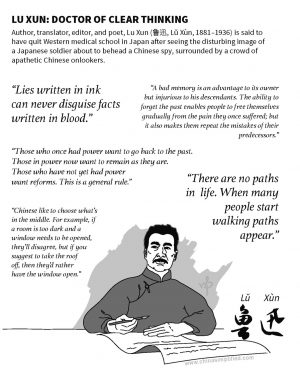 It was a true wake-up call. Much of the Nationalist intellectual discussion was focused on the superiority of Western science and democracy. Everything Chinese was under scrutiny, especially its calcified Confucianism and passive acceptance of feudal traditions. Lu Xun, a well-known man of letters, determined to launch a literary movement which author Jonathan Spence recognizes as seeking “to bring out the reserves of willpower latent in the Chinese people, to imbue his countrymen with the heroic and demonic strength to change their destiny.” Scholar Yan Fu criticized the Chinese “Way of the Sages” and argued for a Western form of government to free the energy of the individual towards collective goals. He once commented that only 30 percent of China’s troubles were caused by foreigners; the rest were her own fault and could be remedied by her own actions. May Fourth confirmed the notion that China had to solve its own problems, and intensified the debate on how to repurpose foreign political ideals to help China become a powerful and progressive nation.

Let’s back to the year 1911, when China’s revolutionaries appointed Sun Yat-sen (孙中山, Sūn Zhōngshān, 1866–1925) as the provisional president of their new Republic. Sun had struggled for decades in the cause of reform: He petitioned the Qing court to modernize the nation—rejected. He led ten uprisings against the Qing—all failed. He spent years in exile to avoid capture.

When the Xinhai Revolution of 1911 broke the Qing stranglehold on power and ended over two thousand years of imperial rule, Sun was in the United States. Nonetheless, his fellow revolutionaries recognized him as their resilient and highly-vocal leader.

Sun’s signature piece was his “Three Principles of the People,” first articulated while speaking in Brussels in 1905. Here is his much-acclaimed philosophy in a nutshell:

In a tragic twist of fate, however, Sun would not live to see his nation-building dreams come true. He died of cancer in 1925, leaving his life’s work incomplete.

“Comparing human and physical properties, we must admit that it’s easier to direct matter than man. For this reason, science has advanced by leaps and bounds, and the means of controlling nature have been nearly perfected and placed at our disposal. We can build machines to fly in, machines to travel in under water. Human affairs, however, are exceedingly complicated.”

Yet a momentous legacy lives on: Nationalists in Taiwan remember him as a founding father; Communists consider him a forerunner of the revolution against imperialism. To this day, Sun Yat-sen is one of the few political figures to represent the common ground on both sides of the Taiwan Strait. 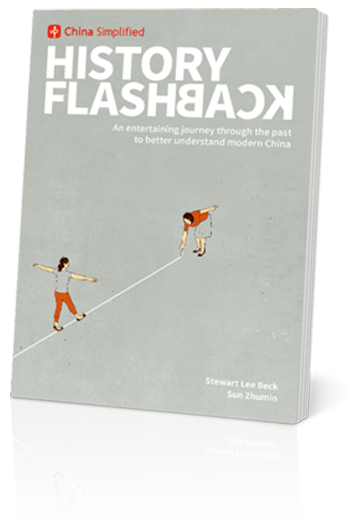 This post excerpted from China Simplified’s History Flashback. Gain valuable insights into today’s China with this fast-read exploration of Chinese history—the revolutionary ideas of its most celebrated philosophers, the bold visions of its dauntless leaders, and the pivotal events which shaped the modern nation. Click here to get your copy in print, digital, or audiobook.

“You’ll enjoy yourself so much you might not realize how much you’re learning.”

— Rana Mitter, Professor of the History and Politics of Modern China, University of Oxford

China Simplified explores and demystifies the country and its people for the rest of the world. By shifting our collective attention beyond the 1% (hot-button issues in the mass media) to the other 99% (relevant conversations about history, language, business, and more), we hope to raise cultural awareness and increase mutual understanding.