The ongoing battle between the Cao and Sima families during China’s Three Kingdoms Period was as complex and unpredictable as HBO’s hit TV series Game of Thrones, based on George R.R. Martin’s book series A Song of Ice and Fire. The Cao and Sima conspiracies and betrayals of China’s third century contributed to the most well-known, history-based Chinese epic Romance of the Three Kingdoms.

The two families started off with sufficient trust and goodwill. Cao Cao as a warlord had proved his military talent by winning numerous battles and demonstrated his loyalty by never grabbing for the throne. Sima Yi for his part attempted to remain safe, outside the power struggles. Cao had to threaten Sima’s life to coerce him to enter the fray.

And so the struggles began, leading to political games between the two clans over 57 years, from 208CE when a Sima first agreed to serve the Cao clan until generations later in 265CE when descendants of Sima usurped the throne from Cao to launch the Jin Dynasty.

All things are wearisome,
more than one can say.
The eye never has enough of seeing,
nor the ear its fill of hearing.
What has been will be again,
what has been done will be done again;
there is nothing new under the sun.
Ecclesiastes 1:8-9

Here is a graphic introduction to the extended power struggle: 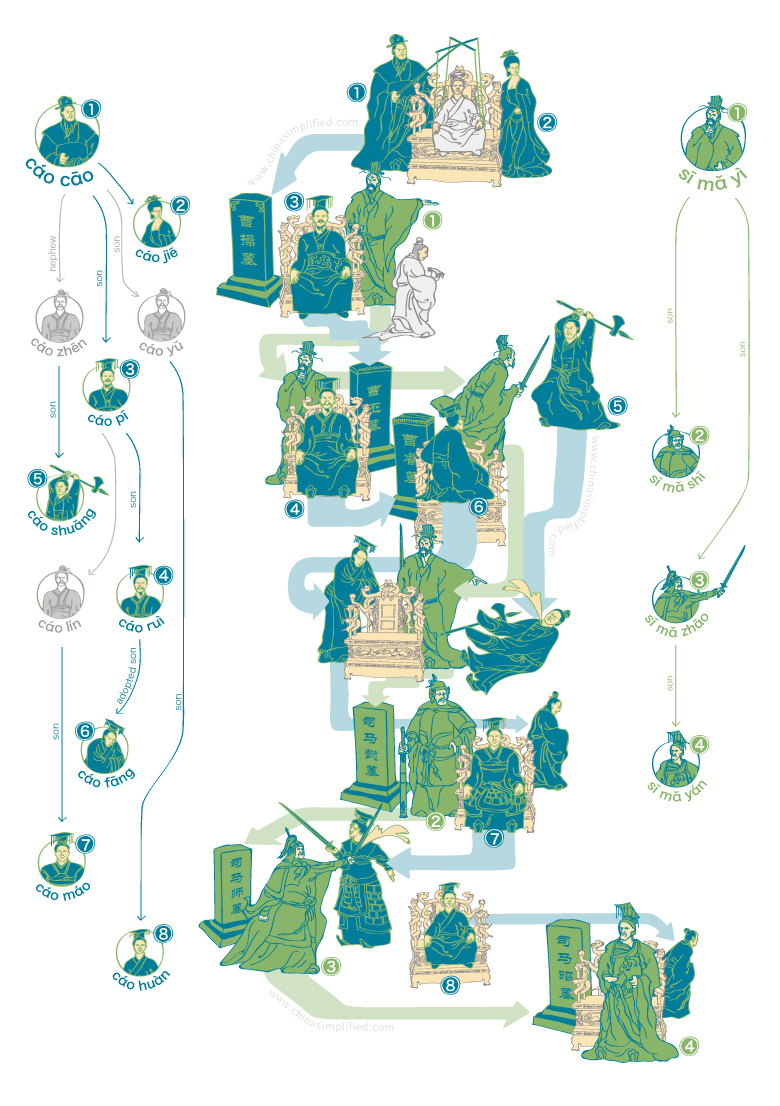 Act Five: Cao Shuang is killed in a coup d’état planned and executed by Sima Yi.

Act Six: Sima Shi (2) succeeds the regency of father Sima Yi and removes Cao Fang from the throne, who is succeeded by Cao Mao (7), great grandson of Cao Cao.

Act Seven: Cao Mao loses the battle and his life to Sima Zhao (3), who took over the regency from his brother Sima Yi.

Act Nine: Sima Yan (4) takes over the regency from his father Sima Zhao, then forces Cao Huan off the throne and starts a new dynasty.

This Game of Thrones lasted nearly six decades. After a seemingly endless string of betrayals and political intrigues, it became nearly impossible for an aspiring official entering the government to pick who would be the next winner. This high degree of uncertainty (and risk of severe bodily harm!) kept many intellectuals on the sidelines to avoid ending up on the losing end of the next battle.

This era of political struggle created a fertile intellectual and creative ground for the emergence of the Seven Sages of the Bamboo Grove. One of the Sages’ leaders, the multitalented Ji Kang, later attempts to say “no” to the emperor’s request (spoiler alert: it gets ugly real fast) as he explores How To Reject A Job Offer With Style.