Silk was once such a prized commodity that an entire trading network spanning 4,000 miles to connect Europe, the Middle East and North Africa with China was named after it. In fact, Europeans coveted silk before they were clearly aware of China’s existence.

Classic Chinese silk arises from caterpillars which feast on mulberry leaves then spew liquid silk from glands in their head to form a cocoon, a miraculously simple process running contrary to ancient Roman and Persian beliefs surmising the lustrous filament as being plucked from silk trees or harvested from silk webs. At this point, human ingenuity takes over, with the silkworm’s mile-long threads woven together into a usable fabric (process shown below in the graphic).

High initial demand and limited supply drove traders to funnel all their inventory to emperors, kings, nobles and highest officials. Trade in this luxurious material grew in magnitude until it became a basic currency in commercial exchanges. The love and longing for silk continues unabated from ancient to modern times, and the magical fiber still finds its way into a wide variety of products from sleek garments to fine home furnishings.

Imagine someone teleported from the Silk Road to Walmart…

“I’d like to pay with this roll of silk, please.”

The Genesis of Silk, i.e. what’s this ugly thing in my cup?

Like many famous inventions, silk found its start in a chance occurrence. Think of how Newton discovered gravity, then substitute a mulberry tree in China for Newton’s apple tree in England.

The legend goes that a silk cocoon fell from a mulberry tree into a cup of hot tea belonging to Leizu, the highly capable wife of the Yellow Emperor, around the year 2650BC. As she retrieved the cocoon from her cup, a smooth shiny thread began to unravel. This accidental discovery led to the domestication of silkworms, thus launching the sericulture movement. History also credits her as the inventor of the silk loom. Archeological evidence, however, dates silk’s Chinese origins to a thousand years earlier. 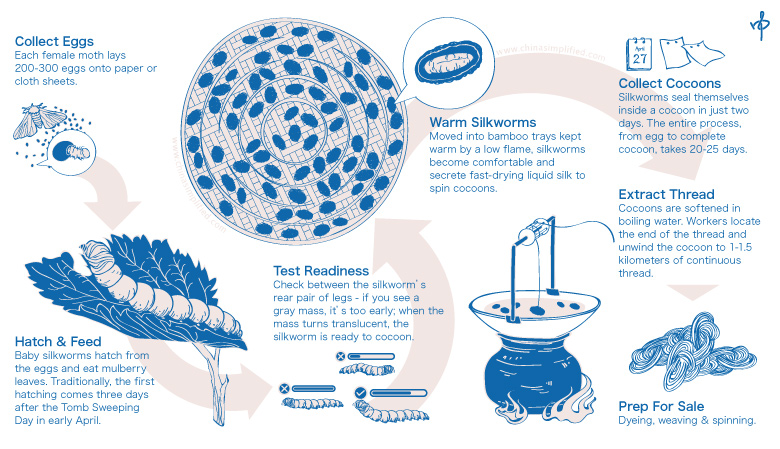 In a modern context, the story might have had a different unraveling:
Leizu creates a business plan which sparks a VC bidding war and mouth-watering IPO timetable, dispatching legions of IP lawyers to file patents in multiple jurisdictions, while meeting with licensing agents of overseas manufacturers, who’ve converged on her high-security facilities clamoring for a glimpse of her proprietary process and perhaps a partnership agreement. Unfortunately for Leizu & Associates, it didn’t play out that way, and one of China’s most closely-guarded secrets became what may have been the world’s first major intellectual property theft.

Beware the monk harboring a strange fascination for silk

One well-known conspiracy theory documented in Edward Gibbon’s The Decline And Fall of The Roman Empire holds that two Nestorian monks absconded with silkworm eggs hidden in hollow canes. The monks parlayed the eggs into a deal with Emperor Justinian in Constantinople, who ramped up production and took over the silk trade into Europe.

The well-known Chinese Buddhist monk Xuanzang (602-664) also provides an alternative narrative in his Great Tang Records on the Western Regions. In this story, the king of Khotan, west of China, tried several times to obtain silk-making technology but was denied. So the king changed strategies. He proposed marriage with a Chinese princess, which was accepted. Before the princess departed for Khotan, the king sent her a secret message: We don’t have silk here, so if you don’t want to run out of fancy silk clothing, you better bring some silkworms with you. The princess complied, hiding silkworm seeds in her elaborate headpiece and dodging security checks at the border.

Silk production spread west to the Mediterranean and Europe, witnessing the rise and fall of cities and civilizations along its journey. Today, China still produces over half the world’s silk, while India is the number one silk consumer.

Had Leizu known that even a little-known beverage advertised as a pain reliever would lead to the giant red kingdom of Coca-Cola, perhaps she might have safeguarded her accidental formula for cocoon tea and profited happily ever after.

What the hell happened to this language gymnast?

What the hell happened to this language gymnast?