The sheer volume of language learning advice out there is overwhelming, so why not let us streamline it for you into six highly practical and actionable recommendations?

As Typhoon Chan-Hom drenched Shanghai, China Simplified waded through a flood of language material in search of the most useful guidance for busy businesspeople and students of culture alike. We hope the six key points below serve as a powerful catalyst to your long term language success and enjoyment!

1. Learn what you need, and use what you learn

“Too many people start off studying boring textbooks that are out of alignment with their goals,” says John Pasden, Founder of AllSet Learning. “A textbook full of stuff you’re never going to use is just going to demotivate you if it’s not helping you communicate with people. Pick up your cues on what to study from the real-life opportunities you have to use your Chinese.”

So if you’re not studying what you really need, what are you actually studying? Those time-wasting words which clog up your flashcard deck are called “leeches” and you MUST eradicate them. Being clear on what you most want to talk about leads to consistent progress and increased confidence.

2. Improve your pronunciation by being a good listener

Linguist Ash Henson observes, “In modern language learning, far too much time is spent on learning to read and write, while speaking and listening are often given the back seat.” This can put a barrier between the learner and the actual sounds of the language, which is of critical importance in tonal languages such as Chinese.

The solution? Listen to native speakers and learn to mimic them so you sound right. Language Consultant Olle Linge, Founder of Hacking Chinese, recommends differentiating between active (challenging) and passive (easier) Chinese listening and adjusting your listening practice to your current state of mind.

Beyond pure perseverance, former Australian Prime Minister and excellent Mandarin speaker Kevin Rudd even recommends singing in the shower as helpful in refining your tones!

3. Vary your study approach as you progress

Katie Lu, Founder of PITT Services and my courageous co-author on Language Empowerment, advises, “Language learning is not a one-size-fits-all endeavor. For new or part-time students, it might make sense to put aside characters until later and focus first on the more western-friendly Pinyin.” The graphic below summarizes Katie’s views on targeting an intended language level.

At a tactical level, you might also benefit from studying according to your current productivity level. According to Olle Linge, “Maximizing output is about being able to find something suitable to study for any given mental state.” Choose a task to match your energy level then timebox it to promote greater efficiency. 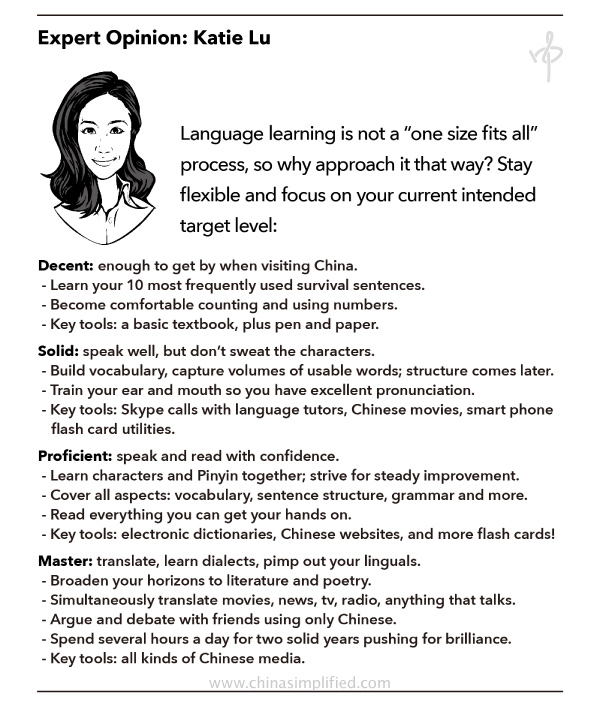 “The absolute best way – really the only way – to learn Chinese grammar is to speak Chinese with Chinese people,” states David Moser, Academic Director of CET Chinese Studies at Beijing Capital Normal University. “Seek out or create, by hook or crook, an environment where you are constantly interacting with Chinese speakers.”

Don’t live in China? That’s no longer a problem according to Carl Gene Fordham who’s persevered to proficiency in his native Melbourne Australia by socializing and creating an effective language learning environment. Finding native language partners and tutors online has never been easier, so always be on the lookout for new and better ways to do things. “Immersion is about doing,” adds Olle Linge. “It might be scary, but the only way to learn to swim is to get wet.”

Greg Whitehorn, General Manager and Senior Consultant at Directions Management Consulting, acknowledges the importance of speaking and listening well, but believes reading and writing are essential to understanding the Chinese culture. He says, “Even now as I read wechat posts and QQ blogs in Chinese, it gives me a deeper insight into thought processes, emotions and world views of the Chinese. Language and culture are intertwined.”

We discussed how digital tools are making Chinese easier to learn in our recent post entitled Will we all be speaking Mandarin in the future? In a similar vein, David Moser shares the delightful story of his pre-digital days crawling through a famous novel by looking up characters using the radical and stroke count method in old paper dictionaries and states, “The Chinese may have invented Chinese characters and paper, but it’s time to separate the two.” He adds, “The crucial skill for the 21st century learner is recognizing characters, not writing them.”

Mark Rowswell, aka Dashan, is equally iconoclastic. “These days, with dictionaries and reference materials you can easily access from a smartphone, people who want to learn a foreign language should throw away their textbooks as soon as possible and just throw themselves into the language.”

Don’t let flashy apps, however, lull you into a false sense of security. John Pasden notes his misgivings about SRS (flashcard systems) and concerns about analysis paralysis, and concludes learning how to effectively use digital tools takes time and determination. When it comes to handling flashcards, John says the solution is simple: Less organizing, more talking!

Acknowledging our lack of perfection, not obsessing over what others think or dreading what might go wrong, offers us huge freedom to enjoy the language. Mistakes aren’t social landmines – they’re social fireworks. Stay humble, stay hungry, and never use the F-word.

Successful language acquisition is more like a marathon than a sprint, so it helps to remain somewhat philosophical about it. Hard core language enthusiast Khatzumoto muses:

Operationally, a language is a habit, not a skill.
A process, not an object.
A subscription, not a book.

The Motion of Emotion

The Motion of Emotion